Article written by George Hoyle (Malaysia). Special thank you to Editorial Manager, Steve Robinson of Sea Breezes Publications Ltd. If you missed Part 1, you can catch up on it here.

The 2nd trip was the traditional route, but including a call at Tarragona after Barcelona to load bulk table wines. It was quite an easy procedure, loading from road tankers and small hoses, with dust covers over the access hatches of the tanks. The tanks were all coated in epoxy resin paint, with minor maintenance between cargoes – touch up work on small pinholes of breakdown of the coating. Fumigating of the tanks took place with sulphur buttons prior to loading. All the ships hoses in the masthouse pumproom were of plastic piping as visible sight pieces to connect to the four mono pumps. All couplings were coated with olive oil (an edible oil). 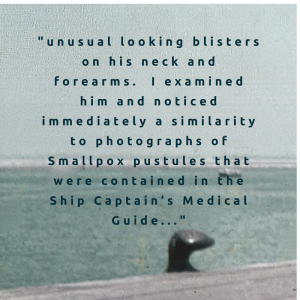 After a couple of trips, Capt Mike Dunn took over as Master. He was a good Master and time and the ports passed quickly by. Then one morning in Barcelona, tragedy struck. One of the AB’s (known only by his nickname as M) came to see me on deck. He said he had some unusual looking blisters on his neck and forearms. I examined him and noticed immediately a similarity to photographs of Smallpox pustules that were contained in the Ship Captain’s Medical Guide, which every British merchant ship had to carry in its medicine chest. I, for my sins, was the custodian of that chest etc. I took him up to see the Captain straight away, and to look at the book. Capt Dunn called the ships agent immediately to arrange hospitalisation and to notify the port authority. Within a very short time, two doctors and an ambulance were alongside the ship, with our agent.

The ship’s gangway was pulled in, the cargo work stopped and all the stevedores told to remain on board whilst our crewman was examined and whisked away by ambulance. Everybody, putting it mildly, (crew and stevedores etc) were scared stiff as rumours circulated quickly. Everybody agreed that he must have picked it up in Casablanca or Tangier, etc. So did we for that matter. The book said the incubation period was about 10 days. Within a very short time, the quayside was filled with anxious families of the stevedores wanting their relatives to come off the ship, but the police guards wouldn’t let anybody off. Later, the Port Health Authority visited the ship and all of us were examined and vaccinated, even the Spanish stevedores. They were not taking any chances, it was the sensible thing. His cabin mates were also closely examined and questioned. After taking all the precautions, they let the stevedores off and we were all confined to ship. We were allowed to sail next morning to proceed to Valencia to load a full cargo of sweet oranges for London. Meanwhile, the ships holds were fumigated and sealed up.
We arrived at Valencia later that day and anchored for a further inspection of everybody on board by the Port Health Authority. No other persons were showing symptoms or fever etc, just lots of anxiety. Next morning, we berthed early to start work at 0800 hours. The stevedores trooped on board and proudly showed us their vaccinations. They compared them with ours; a touch of light relief and shared humour. A fast loading was completed and we sailed direct for London. No mention of it was made in the press, it was kept very sensibly at low-key. No further cases were noticed on board, no symptoms or fevers etc. Arriving off London, we were ordered to go to the PLA (Port of London Authority) quarantine anchorage at Higham Bight just below Gravesend.

Again, a squad of Port health officials and doctors came to examine us, take all our personal details and issued us with little yellow cards to present to our doctors at home if any symptoms were observed. Upon berthing at London Dock, the cargo was discharged within two days and the whole ship was fumigated again (cargo holds and accommodation). It was just before Christmas, so although the oranges were sweet, our experience had been sour. I went on leave thinking that was the end of the matter and wondering what had happened to “M”?

After Christmas, I joined the Pozarica in London Dock. Capt John Rimmington was in command for the fabulous London- Lisbon-London Express service. It was very interesting and I enjoyed it. A few months had passed by and walking home on one sunny evening from London Dock to London Bridge Station I saw a familiar smiling face approaching me. It was “M” from the Pacheco. He looked well and told me he had been in hospital in Spain for several weeks, then returned to the UK. He was now back at sea again. The biggest surprise of all was that he had contracted the disease in London, not Casablanca or any other place. He had been infected by a girl from a pub in East London. There was no doubt in his mind that the routine smallpox vaccination he had before he became infected had saved his life. I was very pleased he was okay and still alive. I recalled that the journey time to Barcelona from London was about 10 days and the penny dropped. Why didn’t we suspect, that day in Barcelona, that it might be London as the source ?

More on George Hoyle’s adventures on the 1960’s MacAndrew Lines adventures next week in Part 3.