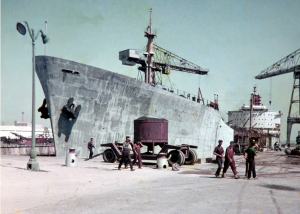 After gaining my Masters Certificate in July 1962, I started to look for another job on General cargo ships, but definitely not anymore tankers. I wanted to have a better quality of life, ie a better social one, to hopefully meet the right lady etc.

The influence of my old friend from King Teddy days, Mike Theocolous, pointed me towards MacAndrew Line in Mincing Lane, and I applied for a 2nd mates job. Fortunately for me, a job came up about a week later and I found myself joining the MS Pacheco in London Dock.

PACHECO: 1,242,GRT, about 1980 DWT cargo capacity. Built 1961 by Grangemouth Dockyard Co, Grangemouth Scotland, Speed 14 knots. Four hatches/holds, with steel wine tanks located in the holds and tween decks section of the Masthouse Midships for bulk table wines. Trading route was; London-Bilbao, Santander or Gijon Northern Spain, Casablanca, Tangier or Ceuta, Barcelona, and several Spanish ports coast-wise to load fruit, potatoes (new), bagged onions, and other general cargo according to the season with a possible final call at Algeciras for cork cargo or Cadiz for sherry cargoes. Total round trip time 21-22 days, with four days in London to discharge and reload.

Bulk wine cargoes were always loaded at Tarragona; about 300 tons of dry and sweet white wines, followed by dry and
sweet reds. It took a total of six hours to discharge using four mono pumps. That was the taste and colour spectrum
procedure for the discharging order of the table wines into the PLA (Port of London Authority) wine vats in Shadwell Basin, near the famous “Prospect of Whitby” pub which overlooked the locks leading into London dock. London Dock, near Tower Bridge, was a “Bonded” dock, next door to St Katherines dock. The other berth, used by Mac’s ships, was Butlers Wharf, immediately opposite the entrance to St Katherines dock on the south bank of the River Thames.

Being a bonded dock, all the wines (dutiable) were discharged there. The wooden barrels, in particular, had leaks in
them as they are stowed three high in the lower holds of the ship and on their sides, so that the heads of the barrels didn’t dry out (which would happen if stowed upright). All barrels that were noted to be leaking during loading in Cadiz were recorded on what we called “an Exceptions List”. This was the custom of the trade to avoid unnecessary claims from the receivers for losses on their wine shipments. Customs and Excise accepted this as well, so due diligence was necessary on the part of the ship’s officers during loading to pick out these particular barrel’s details.

Whilst loading in Cadiz and being discharged in London, the procedure was to use “can hooks” that were linked by a length of chain to two hooks. These hooks fitted over the lip of the barrel at each end. As the barrel was hoisted up by the Dock cranes, the sudden strain could cause them to leak. The solution to that was to have a barrel cooper with a mallet and plenty of tissue paper, tapping the barrel with his mallet after inserting strips of tissue paper into any small gaps. It worked! There was also a cooper in attendance during the loading of the barrels in Cadiz/ Puerto Santa Maria.

Another interesting fact was that on the voyage from Cadiz to London, there would be some leakage from the barrels which found its way into the bilges of the holds. Unfortunately, the liquid content of those bilges had to be pumped overboard from time to time into the sea. A trail of sherry following the ship to London… what a waste!

The trade was interesting and busy. It was literally one port a day whilst on the southern Spanish coastline. Discharging
and loading operations during the day then sail each evening to arrive at the next port for an 8am start the next day. Barcelona was the starting port for the coasting run. The first couple of trips were different. After discharge at Casablanca, we were to load a deck cargo of horses (into horseboxes) on the tops of our hatches as well as on the deck.


Why so many so horses? Well it was the horses used in the filming of the movie Lawrence of Arabia (starring Peter O’Toole as Lawrence) including the famous white horse, along with several extras and horse minders as passengers. We sailed to Cadiz where the horses and film extras, horse minders etc disembarked. Apparently, the movie’s desert scenes were shot near Casablanca, and scenes of the British Army HQ in Cairo shot in Seville, that’s why they all disembarked Cadiz for further filming.


The MacAndrew line ships were painted “all white” and for the fruit cargoes, they used to charge an extra sixpence per ton in the old days as shippers wanted to ship their goods in cool looking ships which also had good mechanical ventilation changes of the air in the holds. A very important selling point.


At Cadiz, we loaded a mixed cargo of cork in bales, barrels of sherry, cases of fruits, cases of sardines, bagged almonds and some general cargo and vehicles.

Part 2 will be revealed next week including the smallpox scare on board!