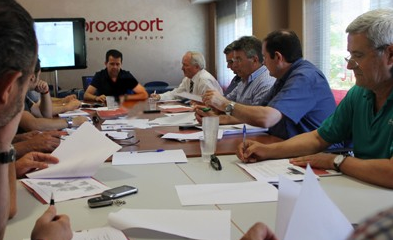 As concerns grow about the impact of road transportation costs, Spanish fresh produce consortium Proexport hopes to open discussions with British grocery retailers with a view to developing a new shipping service between northern Spain and the U.K.

Created in 1975, Proexport brings together company groups which lead the production of fruits and vegetables in the Murcia region. Combined, these companies export nearly one million tons of Mediterranean products.

Reefer transport is one of the main elements that allows fruit & veg producers in Murcia to offer their products to supermarket chains across Europe on a weekly basis. This is why sales directors of Proexport associates have held a meeting today with MacAndrews Reefer Director, to find alternatives for shipping perishable goods.

The President of Proexport, Juan Marin, has stated that it is important that exporters in Murcia “have alternatives to help us deal with such situations as lack of returns by road and rising transport costs. To this end, Proexport has approached its supply chain customers in the UK to study environmental and economic aspects”.

The reduction of environmental impact and costs, in comparison with road transport, with the same capacity and reliability, support MacAndrews’ proposal. On the other hand, transit days expand one extra day in comparison with road transit. “While the transfer to England by road takes 3 or 4 days, by sea it is 5 days. For Ireland though the transit is more competitive than that of the road”, says Mr Gimeno.

MacAndrews operates in Spain since 1870 and it has recently invested in reefer transport. From its own terminal in Bilbao it operates around the Iberian peninsula through its offices in Valencia, Barcelona, Madrid and Bilbao. Its block strains cover all national territory. The shipping line operates regular services with UK, Scandinavia and Holland.

“We have 7 years of experience in door-to-door reefer transport with two systems: refrigerated truck to the port of Bilbao and from there on by ship to its destination; since the beginning of May we also have a dedicated rail service from Nonduermas which loads the same containers on board our ships in Bilbao”, explains Mr Gimeno.

As stated by the Reefer Director in Spain, “we are offering an alternative transport mode with 5 weekly departures. It is not a substitute, but an alternative. Murcia Producers can try it and combine shipments by sea with their current transport systems”.

Proexport is aiming to put a service in place that will transport fresh fruits and vegetables by train from southeastern Spain to the Port of Bilbao. From there, they will then be shipped to the U.K. If successful, the organization is hopeful additional maritime services could be added to ports in Scandinavia and Germany.

Proexport managing director Fernando Gómez said that although discussions were still ongoing with the shipping company, the export consortium was hopeful such a service could ease financial pressure on its member growers.

Gómez said the organization hoped to benefit from MacAndrews’ coverage from Bilbao to the U.K. and Northern Europe, as well as potentially taking advantage of a new rail service between Murcia and Bilbao that has been established to transport fresh produce directly to the Spanish port.
“For some time we have been working to improve the transportation of fruits and vegetables produced in the region of Murcia with the aim of reducing logistical costs, maintaining our competiveness and reducing our carbon dioxide emissions,” he said.
“It would also be means of saving on all the taxes and tolls we have to pay at the moment by transporting our goods by road, while also ensuring we are giving the same level of service to our clients.”

Gómez said that although discussions with the shipping firm were still in the early stages, transportation by sea, as part of a mix of logistical solutions, should play a part for Proexport.
“We want to have high level discussions with U.K. supermarkets to make this idea a reality,” he said.
“This is important for the sustainability and competitiveness of our companies because we can’t continue competing with overseas exporters that do not comply with the labor and social standards that we have in Europe.”

Although sea transport would take five days on average to reach U.K. ports instead of three to four days by road, Proexport’s managing director said he was confident that 24 hours more would not constitute a huge amount when compared with 20 to 30 days for some overseas exports.
“Although it is still early in the discussions, there is an understanding between Proexport and MacAndrews that we will make this a reality,” Gómez added.

The real winner will be the end consumer because they will receive the best quality fresh produce in Europe at reduced costs and with a lower impact on the environment.