Carriage of goods involves many professions or activities related to the sea.

When your containers are loaded or unloaded on a vessel, the vessel’s crew needs help and assistance to keep the vessel safe.

Discover below the non-exhaustive list of professionals involved in the arrival and the departure of the vessel:

The Harbour Master’s Office is in charge of the reception of vessels. Its missions is to ensure the safety and security of all port users by ensuring that all the conditions for nautical safety are fulfilled. The Harbour Master’s Office, including but not limited, coordinates and regulates maritime and inland water traffic movements such as loading and unloading operations. It also places all the port and vessel teams involved in contact with one another (tugboat operators, vessel’s pilots…)

captain when the situation gets risky or if the vessel requires greater skill in the manoeuvring of the ship.

The longer is the vessel, the more important is the role of the ship’s pilot. Vessels that carry cargo are heavy and difficult to manoeuvre without any loss. Also, if the port is quite narrow, the ship’s pilot will guide the vessel to the best way to pass through the narrow gateway without any incident. The ship’s pilot is constantly in contact with other port professionals such as the Harbour Master’s office, the vessel’s pilot, the tugboats etc, all people involved in this manoeuvre.

Ship piloting is compulsory for all vessels measuring over 75 metres in length and/or carrying hazardous cargoes.

The tug boat is a boat that manoeuvres vessels by pushing or towing them in crowded harbours and channels.

Its role consists in assisting for the channelling, docking hauling and departing from the port, but also assisting and rescuing a vessel in difficulty. It is not compulsory to have a tug boat when a vessel manoeuvres but most of the time the Harbour Master’s Office will require the use of tugboats to limit the risks of damages. 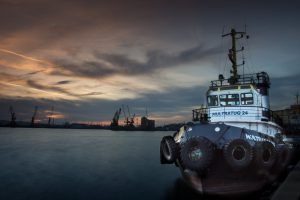 Marine surveyors are technical specialists who, with their experience, training and expertise, conducts inspections, surveys and examinations of vessel. Then, the marine surveyor reports and monitors the vessel general condition and reports damage if needed. He/her also inspects the equipment to ensure that the various standards and specifications are fulfilled.

The shipchandler is considered as a supplier. The shipchandler provides fuel, foodstuffs and other supplies. But it also can bring mechanical, electrical or electronic stuffs if the vessel needs it.

The cargo handler carries out all the stowing and unstowing, ship loading and discharging operations, including storage in sheds and open-air storage movements. He may also be responsible for cargo warehousing, reception and management quayside.

The ship’s agent represents the shipowner at a port during the call of a vessel. Regulations require vessels to have a designated officer on site.

He will assist in the preparation of the port of call by his knowledge of the country, the port and the various stakeholders available on site. Its main missions are to:

The captain contacts the authorities through his ship’s agent.